Arch. Claudio Nardi produces architectural projects, for government offices and private clients, in Italy and, above all, abroad. Among his most recent projects are New Town Hall in Krakow (now in progress) and the new headquarters of the Port Authority at Marina di Carrara (2007), the Vertex tower and Office Building in Amman (2007), the new Museum of Contemporary art at Fabrika Schindlera in Krakow (2010), dealing with the theme of transformation, the relationship between innovation and history, between form and function, between „product” (in the broadest sense) and communication.

Among his many projects in the fashion world appear names like Dolce e Gabbana, Ferrè, Valentino, Extè, Malo, Tod’s etc. Every time, his work involves in-depth study, not only in his own sphere of specialization; every project, even an interior, is to a large extent developed through the use of light, sensitive materials and particular combinations of surfaces, volumes, solids and open space.

The Museum of Contemporary Art in Krakow (MOCAK), designed in order to achieve balance between past and the future, built in pavilions of the former Schindler’s Factory, opens an important chapter in cultural life of the city.The area designated for the new museum coincides partly with the industrial pavilions of the Schindler’s Factory. It’s one of those places which are fixed in the collective memory and in the history of men, their crimes as well as their heroic acts.

The idea of transforming this place and integrating them with new spaces, into a destination for art, culture, and contemporary society, cannot but bear witness to the way in which memory can be nurtured to become a path toward the future. The events that have taken place within those walls have already witnessed the possibility of hope, of a way forward, out of the horror. The industrial roof-lines of the existing buildings have become a motive, a visual element carried through the entire project, evoking, in this case, the continuity between preexisting and new construction.

The main façade, to the south, is a glass wall which allows views of the galleries from the outside and views of the walkway and the abraded walls of the old factory from the inside. The disposition of space is already clear from outside, highlighted by the anthracite grey wall in cement facing, which gestures from the entrance plaza, drawing the visitor into the museum itself through the glass main façade. The roofing of the new pavilions consists of a metallic grid structure which supports a lightweight but rigid shroud in black titanium-zinc that blends with the existing roofs. It’s industrial character became an inspiration for an entire complex. 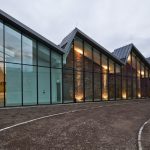 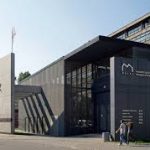 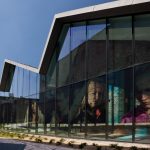 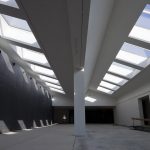