Carlo Berarducci Architecture is an awarded architectural firm based in Rome with projects andrealized buildings in Italy and abroad. The studio deals with the design at all scales, from architecture and urban planning to the scale of interior and furniture design. With a consolidated experience in the design of large residential developmentsthe studio performed and realized a number of residential complex, and reached a recognized and rewarded experience inconversion andredevelopment in consolidated urban areas with contemporary languages and hight standards of details. The design approach of the firm starts from the ever-changing conditions at the base of each project, due to the specificity of the site, clients, program and its environment, avoiding the search for a defined and repeated formal identity in favor of a study of volumes, spaces, light and materials specific to each project.

Carlo Berarducci Architecture received awards in national and international competitions and awards. Among recent projectsis Zen Sushi Restaurant in Rome inspired by thecolours and suggestions of Kyoto temples, Kami Spa Parioli a Luxury Oriental Day-Spa in Rome and Haus Bavaria, a big private residence in an heritage urban site in Bavaria, Germany.In 2014 he was invited along with other four German firms to develop a proposal for a new intervention in the historic center of the UNESCO World Heritage city of Regensburg in Germany. Between others projects are several residential complexes in Rome, Fregene, Olgiata for ParsitaliaCostruzioni Real Estate one of the biggest real estate agency in Rome and the Libyan European Hospital in Libya, a surgical clinic and conference center with European standards on the waterfront of the Roman city of Sabratha in Libya.

Carlo Berarducci graduated with honors from the University of Rome La Sapienzawhere healso obtained the title of Doctor of Philosophy (PHD) in Theories of Architecture with a thesis entitled „Art and Architecture, from the raw material to the miracle, the relationships between the languages of art and architecture”.On behalf of the Vicariate of Rome, he led to the realization his thesis project for a repeatable model of church and parish complex with the building of S. Agostino of Canterbury in Rome, honored at the „Inarch Award 2001” and the „First Prize of Architecture Trevi Flash Art Museum”.

Zen Sushi Restaurant has been completely redefined by an interventioninspired by the temples of Fushimi Inari in Kyoto of which reproduce colours and suggestions.

The project is inspired by the walkways in the forest bordered by the succession of matt black and glossy red-orange wooden portals, which lead to the temples of Fushimi Inari in Kyoto, of which reproduces colors and suggestions.

Zen Sushi was the first Japanese restaurant to bring in Italy the Kaiten, the particular conveyor belt to serve freshly prepared sushi on colored saucers indicating prices. On the tenth anniversary of the restaurant in Rome the property wanted to give a new look. The design challenge was to create a space with a truly Japanese essence in a contemporary way.

The dynamism of the kaiten suggests to emphasize the dynamic dimension of the space. The project, conceived with the Kyoto walkways in mind, is thought as a process, a succession of steps and changes of direction that gradually reveal the spaces of the restaurant and never close the perspective. To each change of direction corresponds a subsequent opening that invites to continue exploring the space.
The straight lines of the suspended ceilings and the infinite sequence of the vertical elements of the walls underline this dynamic. Red orange reflecting suspended ceilings emphasize the visual perspectives and identify the different areas of the hall, the sushi bar and a small more intimate room in the bottom, dividers and wall coverings formed by the close succession of thousand of vertical black timber elements, lacquered from one meter up of glossy red-orange, drive and mark the going through, while a rice paper backlit wall underlines the central focus of the restaurant, the Kaiten and the open workstation of the sushi master. All the space is conceived as an architectural promenade rather than a simple decor of the interior.

As the works should have to be done in the four weeks of the august holidays the attention was focused on a few elements that could strongly characterize the space while the spatial box was neutralized with blacks floors and black ceilings and air systems. Ceilings, wall coverings, and a backlit wall are all designed as separate elements between each others, like suspended inside the space in such a way that they could be manufactured and assembled independently from each other and from installations allowing to accelerate the phase of realization on site. 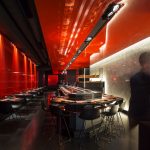 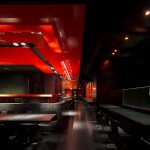 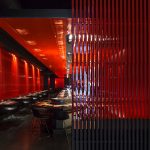 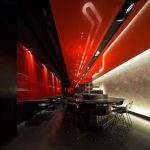 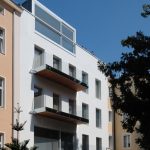 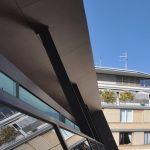 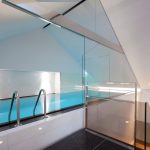