AWARDS:
2015 ORDER OF POLONIA RESTITUTA, PRESIDENT OF THE REPUBLIC OF POLAND, 2012 BRONZE MEDAL GLORIA ARTIS, MINISTRY OF CULTURE AND NATIONAL HERITAGE, 2010 PRIZE OF HONOR, THE ASSOCIATION OF POLISH ARCHITECTS (SARP)

Bolesław Stelmach gratuate from Cracow University of Technology, the Faculty of Architecture in 1980 and Warsaw University of Technology, post-graduated studies in Spatial Planning in the Faculty of Architecture of in 1984. In 2009, he obtained the title of PhD, Engineer of Architecture. General designer of Stelmach i Partnerzy, architecture office founded in 1992, specializing in urban planning and architectural design of cities, landscape and houses. The company operates all over Poland with its main office in Warsaw and Lublin. Bolesław Stelmach, called „the master of glass and concrete”, is the winner of several Polish and international architectural design competitions. His architectural works are characterized by great consistency in pro-ecological, functional approach to modern yet beautiful buildings, which enrich the existing landscape and respect the cultural environment. These qualities were recognized by the Association of Polish Architects, which granted Bolesław Stelmach the most prestigious distinction – the Honour Prize in 2010.

Frederic Chopin’s home at his birthplace in Zelazowa Wola has been used as his biographical museum for more than one hundred years. In 1930s esteemed architect, professor Franciszek Krzywda-Polkowski created modernistic park – memorial of the great composer. The preserved outbuilding, remodelled into a small manor house /”H” building/, was surrounded by a park with garden elements built of fieldstones, ceramics, concrete blocks and unprocessed timber. With the time, the park fell into neglect and required revalorization and adaptation for contemporary museum and tourist purposes.

Bolesław Stelmach won a competition for modernization of the entire site. Idea of the park revalorization was continuation of Franciszek Krzywda-Polkowski design assumptions and was based on current tourist traffic services and preserved historical elements. In old building walls were dehumidified and foundations strengthened. On the park perimeter, new pavilions were partly fused with the garden wall: park entrance/multimedia room/café pavilion /”A” building/; protection service building /”B” building/; multipurpose hall/restaurant building /”CD” building/. From the side of the park pavilions are almost entirely glazed and opened towards the delightful surroundings. At the back of the park there are utility buildings, hothouse and park administrator house /”EF” building/. Behind hothouse there is enough space for garages for cars and mechanical garden equipment. By the pond there is amfitheater with background /”G” building/, where outdoor concerts take place in the summer months.

During the revalorization several dozen thousands of plants were planted in the park, ground cover plants are composed by Hedera helix. Old growth trees – nature monuments are under protection of nature conservators. Typology of the buildings was imposed by existing pattern: one wall is garden enclosure and the second one opens towards the park. Majority of construction is made of local, natural materials:broken, colourful fieldstone from nearby fields for casing of solid walls and glued-laminated timber of Pseudotsuga taxifolia tree growing in the park. Architect reconstructed old garden elements of recovered old bricks and new, hand-formed ones. New benches, garbage cans and lamps were designed. In recognition of the used solutions, Restoration of Chopin Museum – Park in Żelazowa Wola with the construction of turist facilities, administration buildings and back offices in Żelazowa Wola received UIA Medal ( Medal of international Union of Architects ) during Congress in Tokio in 2011 and was nominated to European mies van der Rohe Prize as Polish candidate in 2011. 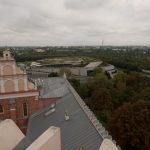 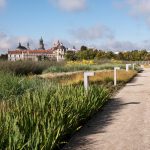 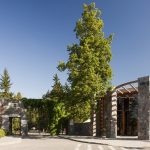 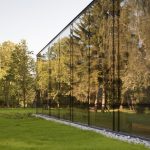 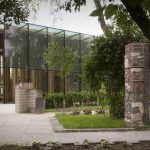 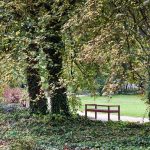